Another trip to Cheshire Record Office, this time for research into Cheshire Gamekeepers,has yielded one of my favourite document finds yet!  In the catalogue, it is entitled ‘Mock Manorial Presentment of William Tipping’ and is thought to date from around 1715.  It  is signed ‘Peter Shakerley’.  It details a poaching story, with some real life characters, with a little moral tale thrown in, but who comes out on top? Read on to find out!

“May it pleas you Mr Steward and yr of this Jury,

I present this to inform yr that a couple of Foxes made lately an Agreement to have a feast of Stubble Gees, and each of ’em was to bring one goos; that they might not interfere in each others territories they consulted which way each should goe to look for their provision; one of the Foxes is call’d William Fox, the other is call’d James Fox.

William Fox say’d hee would goe and take one from Will Tipping’s; James Fox say’d he would goe and take one from James Faulknor’s. Now James Fox adviced William Fox to have a care how he came near Will Tipping’s for hee was a very dangerous man, kept a gunn in his home, had power and authority to shoot in that Lordship and had sum time since by shooting, killed one of their Bretheren. Pugh! say’d William Fox, I care not a F___t for Tipping’s gun nor him neither, I will take one of his gees; Ay, and I will due it at noon Day, for as for his Gun, the toutch hole of it is out of Order and he cannot due me any hurt with it, and as for a Dog, hee has none but a little ‘ould Blind Tike that only lies by the fire, and B_shits the house, I therefore can and will have a goos from thence.

Well, say’d James Fox, and I will have a Goose from James Faulkoners, and I can take easily in the night time for his building (where for Fashions sake he puts his geese at nights) is so out of repair that I can easily goe in and choose the fattest goos in the Flock, soe away William Fox and James Fox went and took each his goos as they had agreed and feasted themselves plentifully therewith..”   (cont’d below) 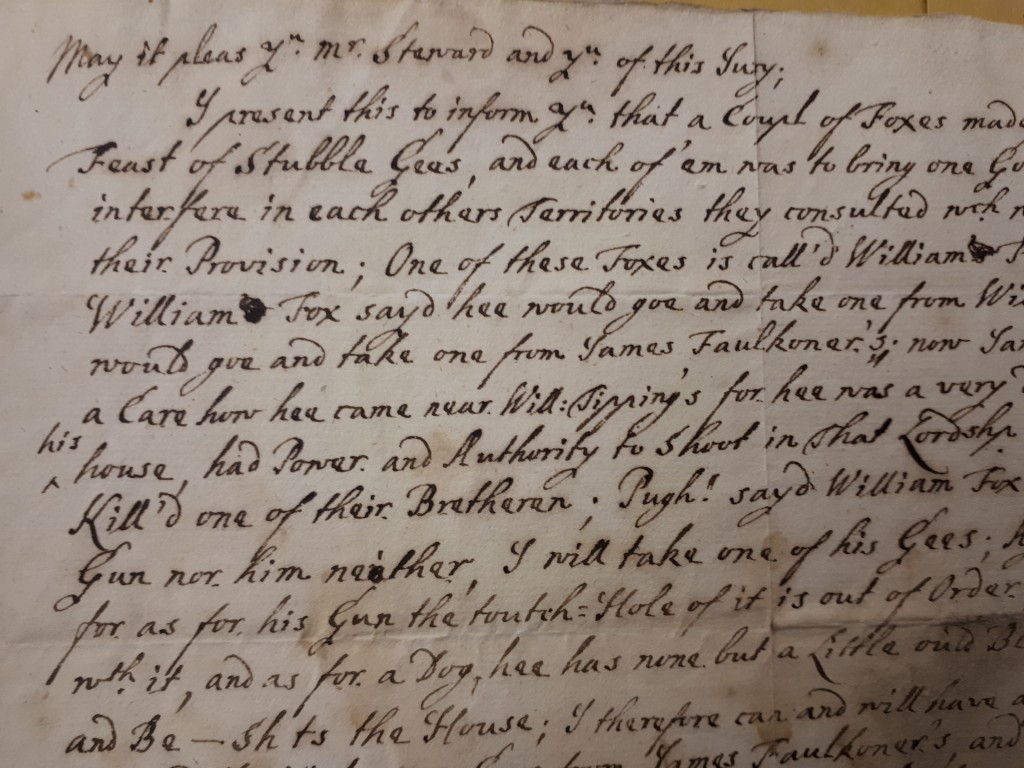 The account continues, inviting the Jury to come to their own conclusions:

“Now Mr Steward and yr of this Jury, I must submit it to yr, what pain or Penalty you shall please to inflict upon William Tipping for not keeping his gun in better order since he is Gamekeeper in this Lordship and ought to see that noe Damage is don therin by Foxes or otherwise and also what pain or Penalty  you shall pleas’ to inflict upon James Faulkoner for not keeping his building in Better Repair.” 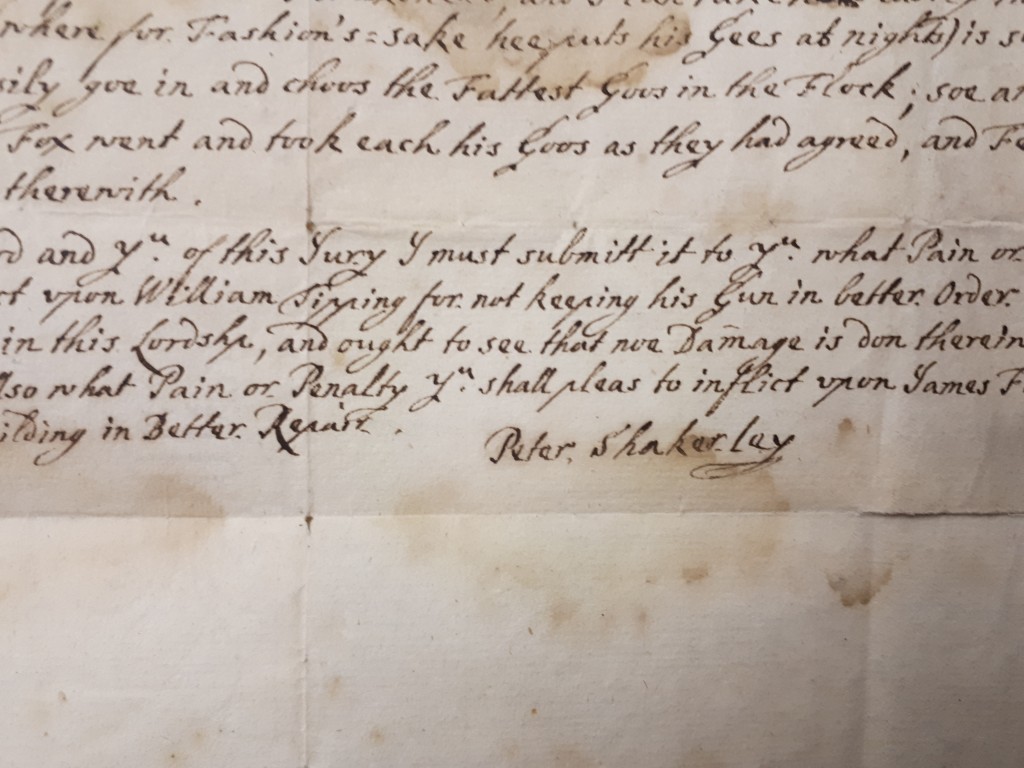 The catalogue entry also notes that William Tipping was indeed a real Gamekeeper, in the Manor of Somerford.  Peter Shakerley (1655-1726) held the manor of Hulme and later Somerford, and had the Georgian mansion of Somerford Park built around 1720.

It is difficult to imagine that Shakerley would be the true author of this letter, it is more likely to be someone poking fun.  We will probably never know the true writer, but who ever did write it, perhaps an unchallenged poacher on Shakerley’s lands, or a neighbouring Lord, has left a fascinating and witty tale behind,  a true Fantastic Mr Fox of the eighteenth century! 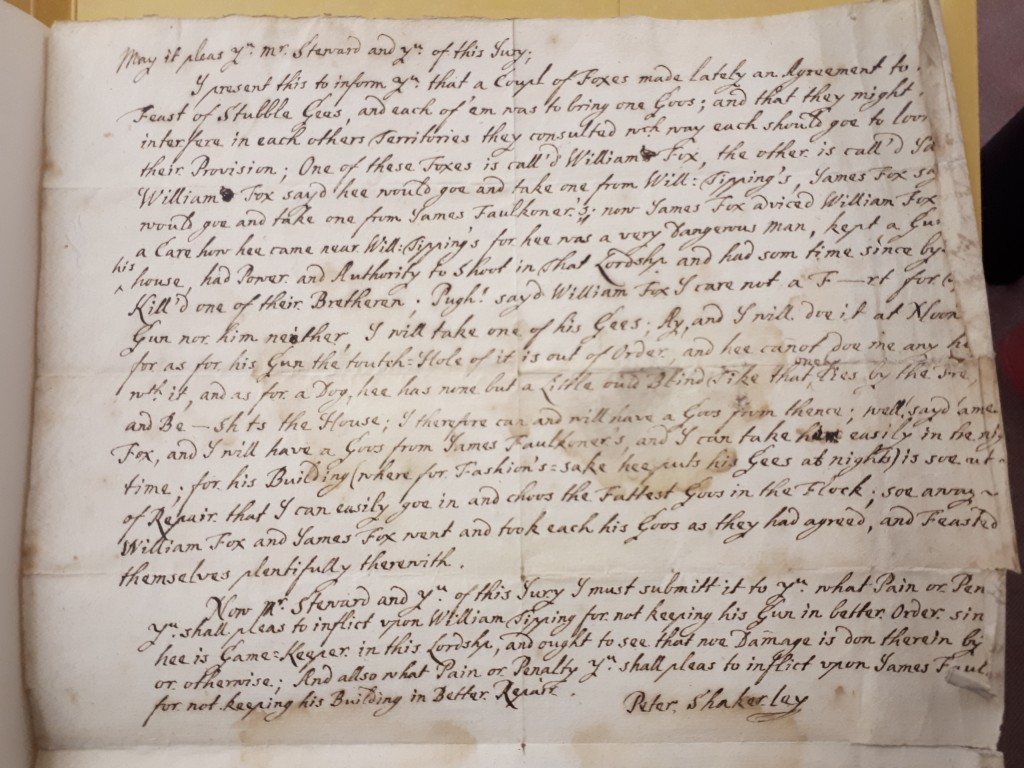